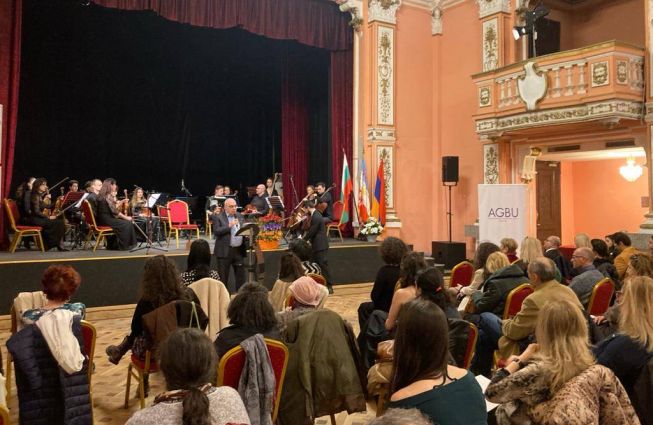 On 3 April 2022 a concert of the Parekordzagan/AGBU-Sofia Orchestra dedicated to the commemoration of the 107th Anniversary of the Armenian Genocide took place with participation of conductor Levon Manukyan, featuring well known qanun player Narek Kazazyan.

“The Unfinished Spring” - a piece by conductor Levon Manukyan, dedicated to the 15th anniversary of the tragic death of Hrant Dink was premiered during the concert.

In his address Ambassador Yedigarian noted that the silence and the amnesia of the international community regarding the Armenian Genocide later gave birth to other crimes against humanity. The Ambassador noted that the denial prevents inflicted wounds from healing, distances the possibility of the repentance for the crime committed, thus hindering the reconciliation.

Ambassador Yedigarian stated that Armenia is on the forefront of the prevention of the risk of recurrence of the crime of genocide and mentioned the UN Resolution adopted by the efforts of Armenia on 2015, as well as the Resolution on "Prevention of Genocide" initiated by Armenia and adopted on 31 March 2022 during the 49th session of the UN Human Rights Council. The resolution, assessing current threats and challenges, outlines the steps to be taken jointly by the UN member states towards prevention of the calamity of genocide.

Ambassador Yedigarian also noted that this year marks the centennial of the first mass immigration of Armenians to Bulgaria as a result of the forced deportation of the Armenians in 1922.

The Armenians were given a chance to survive and develop as a community in Bulgaria. The two peoples have been living together, having established strong bonds of trust and friendship, as well as the deepest levels of intercultural dialogue. Ambassador expressed gratitude toward the people of Bulgaria.